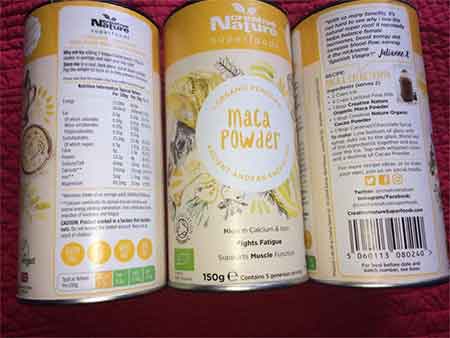 Maca has continued to gain more attention lately due to its power to boost libido in both men and women.

Researches have showed how this superfood could affect sexual drive.

However, a sad thing that can happen to an individual is to fantasies about a high performance, but failed to live up to expectation at the prime time.

It is like ending up a 2-minute man when it comes to satisfying your spouse in bed.

For a woman, failure to hold the tempo on till orgasm could also be frustrating.

Some women easily lose interest in sexual activity even in the middle of the foreplay. They end up not getting satisfied or even satisfying their partner.

Maca is a Peruvian plant grown in the Andes mountains.

It is a cruciferous vegetable and it is related to broccoli, cabbage and kale.

The root of the Maca plant is often blended into a powder form and could be added to meals or smoothies.

It is widely used in cooking, but it also has health benefits.

Organic Maca Powder is a versatile superfood powder that anyone can easily incorporate into various recipes.

The power is also known as “Peruvian Ginseng”.

According to researches, the powder is rich in various minerals and vitamins – Calcium, Iron and Zinc –  are crucial for healthy bones, red blood cells and immune function.

It is also high in Iodine which supports healthy adrenal gland and thyroid function. This ensures hormone balance and weight maintenance.

This powder has been suggested to raise libido and sex drive, in both men and women while it also increases energy levels.

The superfood also improves endurance and mood and may also help with post-menopausal depression and anxiety.

This Organic Maca may be the ideal superfood for you.

Maca root could also have benefits for people with erectile dysfunction (ED).

The same report published on NCBI stated that further RCT assessed the effects of maca in patients with erectile dysfunction showed significant effects.

It is also a superfood that boosts fertility both in men and women.

A 2016 review of the NCBI provided suggestive evidence for the effectiveness of the plant in improving semen quality.

They, however, emphasised that further research was needed to be firm in drawing such conclusion.

The powder is great for women who are in perimenopause stage and are experiencing estrogen levels fluctuation and other related symptoms.

Another study by NCBI in 2006 observed multi-functional actions and multi-directional effects of non-hormonal Maca-GO administration on endocrine relationships.

According to the study, the effects explain Maca-GO’s positive influence on endocrine glands to regulate the hormonal balance in women who have just entered menopause.

Maca root has showed potency in addressing issues that are related with memory loss that is not as a result of old age.

Researches on animal models, one of them mice, showed that Maca could boost learning and memory.

There are also suggestions that Maca could be used in the treatment of conditions that are related to memory loss.