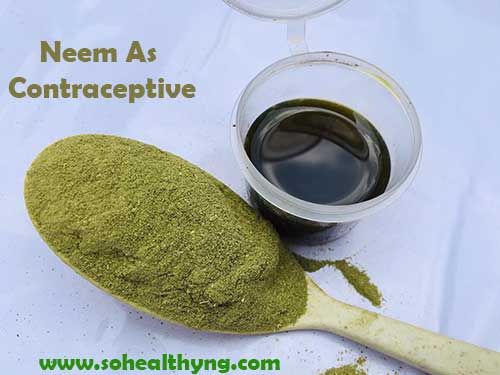 Did you know using Neem as contraceptive could end the worries you have when you have sex during your unsafe period?

You must have searched for knowledge about what to do to keep pregnancy away till you are ready?

Using Neem as contraceptive could help.

We have seen women appear broken after they discover that they are with a child. It was not their desire to have a baby, but the baby is there growing.

Indeed, it is possible to decide when you will get pregnant.

Unfortunately, most women lack basic knowledge in this area.

Some women like Confidence have found themselves in a dilemma, after they had hung their boot.

Sex is sweet, but when a the window is not safe, the sour taste shows up.

Confidence broke down in tears when she found that simply using neem as contraceptive would have saved her the pain she now faces.

Thrown between going for an abortion or keeping the baby, her day is full of thoughts.

Her mind race from what will be and what will not, as she continues to hope she will get her husband’s support.

She is also a strong believer and one who detests abortion.

“I expect that you know you are not safe and do something after we had sex,” he said when she raised the issue.

“I think you may need to take it out, but the decision is yours. You know your body and know if you can cope,” he added.

He sounds so unconcerned, but he is very concerned about his wife’s health at the moment.

He does not also know if the family’s income can carry them with a new baby added.

This are common fears that people have about a situation like this.

For Confidence, going through nine months with a baby, barely 6 months after she gave birth, is a serious situation.

Consumed by the moment, she continues to pray the baby will just drop by itself, but this one has come to stay. Indeed, her prayer should be for more income.

Fortunately, you do not have to go through Confidence’s experience to learn.

Neem as contraceptive is a tested and trusted solution that can help you enjoy sex without protection as married couples.

God gave us neem as contraceptive to help us place control over when we will have a baby.

In a study, researchers described neem as a solution to different nation’s population control issues.

According to the study, using neem as contraceptive worked in all tests.

Neem Prevents Pregnancy In All Species

Neem works better when you use it in oil form. Neem oil is a strong spermicidal agent. It renders the sperm ineffective.

“Rhesus monkey and human spermatozoa became totally immotile within 30 seconds of contact with the undiluted oil.”

Also, study conducted with rats, rabbits, rhesus monkeys  and human volunteers, proved that neem oil applied intravaginally (into the vagina) before sexual intercourse prevented pregnancy in all the species. (1)

Furthermore, Neem oil also has anti-implantation/abortifacient effect in rats and rabbits. All you need to do is apply on the vagina on day 2 to day 7 of expected pregnancy.

Note that the minimum effective dose used for rats in the study is 25 µl.

Another study on the effective Contraceptive Properties of Neem Oil found that it is a good contraceptive.

People Loved This Article: How To Use Goron Tula For Menstrual Pain

According to the 2018 study, neem does not just work as contraceptive. It can also lower risk of sexually transmitted diseases.

In the study, a total 246 women in the fertile age group were selected.

There was no such serious adverse reaction and event noticed during the study period.

“The general observation indicates that Neem seed oil may be used as an external barrier as cost effective herbal contraceptive for its spermicidal property and safe for regular use.

“Moreover, it was also observed that trial subjects had very less incidence of leucorrhoea, urinary tract infections and other common sexual transmitted diseases during the treatment period,” the researchers recorded. (2)

If you are wondering how ‘Neem as contraceptive’ will turn out should you desire to have a baby, just continue reading.

Later Effect When You Want To Get Pregnant

In a study, it was observed that one month after the stoppage of neem oil application there was complete reversibility in fertility in these animals.

It had no deleterious effect on the subsequent pregnancies and the offsprings.

This means that once you discontinue the use of neem as contraceptive, you will conceive.

This is indeed another good contraceptive aside from castor seeds that we had sheared earlier.